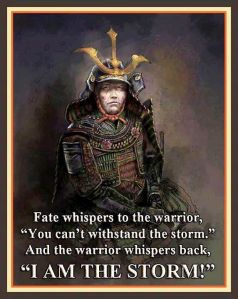 Although I have been a “Prepper” of one sort or another all of my life,  it wasn’t untill I started this blog that I interacted to any degree with the Prepper community. Reviewing the vast number of prepper websites, I notice that there are different mental attitudes towards prepping. I wonder exactly how many preppers have actually thought about why they want to survive, especially in a TEOTWAWKI situation. So, are you prepping to withstand the storm? Or are YOU the storm?

If you are reading this, then to some degree I’m preaching to the choir. It should be obvious that many storm clouds are forming over us, both in our own country and overseas.  Political storms, social storms, financial storms, religious storms, military storms.  An astute observer of history will not need a crystal ball to see that push is coming to shove in a lot of places and in a lot of areas. Human history indicates that major changes are coming, and by storm. America is over 18 trillion dollars in debt, and most citizens go merrily on their way, many seeking more goodies from government. We are at war with a theocracy called Islam, and most citizens of Western civilization haven’t got a clue about it. The United States has a patchwork grid system just begging to be shut down. Foreign hostile militaries increase vigorously, smelling blood in the weakness of the gutless cowards running the Western nations. Storms. Lots of storms.

So Why Are You Prepping To Survive?

Obviously we prep for any serious contingency. Short term issues such as hurricanes, earthquakes, etc. have obvious answers to the above question. You prep to survive in order to go back to normal, or rebuild normal. Because a normal is possible to obtain.  But what about if it all comes crashing down and we actually experience The End Of The World As We Know It?  A number of plausible events could cause that. If it happens on any level, is your concept of survival limited to simply waking up breathing each day? Is just staying alive each day satisfactory for you?  For many people, that will be the end goal. After most of the sheeple die off, many will be content to just wake up alive each day.

I see many preppers concentrating on a defensive attitude that proposes just that.

But not for many of us. I plan to survive for a purpose. To fight to rebuild what the gutless and lazy have allowed to be destroyed. To do all I can to rebuild a society where my grandchildren might just have a chance to actually rebuild a decent civilization. Because there has to be a purpose to life beyond just breathing. Beyond just surviving. There are other storms forming. Storms of people in the United States, The United Kingdom, and Western Europe who are fed up. Who refuse to be sheeple.

I am a Christian. I refuse to be denigrated for my faith and see my monuments desecrated and torn down to appease the shrill minority. I refuse to be told that I cannot express my faith because it might “offend” someone. I will speak out even though way too many “Christian ” pastors worry more about their IRS standing that speaking out the truth. I have great respect for the nation of Israel and the Jewish people. I will continue to support them against Obama’s anti-semitism.

I am a soldier. Even though I no longer wear the uniform I wore for 20 years, I will keep faith with the oath I took to uphold the Constitution of The United States against all enemies foreign and DOMESTIC. I refuse to accept that Sharia law might have any place in my society.

I am an American citizen and I refused to be disarmed by those who wish to manipulate the sheeple to garner votes. I refuse to accept people who come here as criminals in the night and expect me and mine to support them.

There are many clouds on the horizon, each of them whispering to me that I cannot withstand the storm.

I will continue to whisper back, I AM THE STORM!

Are you the storm?

Note: I do not know who owns the rights to the Samurai poster. Credit for the quotation goes to 556 Productions. 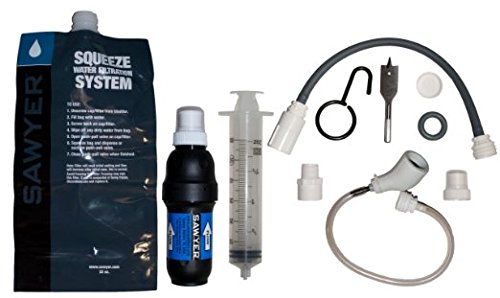 The current affairs side of thegraysurvivalist