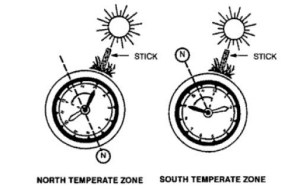 In an emergency situation where you have to move rapidly, knowing direction can be critical. But what if you don’t have a GPS or  compass, lost it, or it broke? Knowing how to find North by other means, either in an urban  or rural environment is an essential skill. Let’s look at some ways to do that.

Our ancient ancestors moved all over the world and populated the planet without compasses, maps, and certainly not GPS’s. They were close to nature and observed the world around them. They learned to navigate from nature, and natural events. In a SHTF or even TEOTWAWKI, you may have to do the same thing. It basically is a matter of the earth’s relation to the sun. The sun always rises in the East and sets in the West but depending on the season and what hemisphere you are in has an effect on it. In the Northern hemisphere the sun will be due South  when at it’s highest peak in the sky, and will be due North at the same time when in the Southern hemisphere. In the Northern hemisphere shadows will move clockwise, and in the Southern hemisphere, counterclockwise. Here are some techniques to use to navigate using these physical facts.

mark the first shadow in the morning. Use a piece of para cord to draw an arc through the first mark and around the stick. At noon the shadow will disappear. In the afternoon it will lengthen again and when it touches the arc, mark that point. You then draw a line from the first mark to the second, and you have an East-West line.

true local time without adjusting for daylight savings time. If you are in the northern hemisphere, hold the watch horizontal and point the hour hand at the sun. You can then bisect the angle between the hour hand and the 12 o’clock mark to get a North-South line. In the Southern hemisphere, point the watch 12 o’clock toward the sun and halfway between 12 and the hour hand, you can get a North-South line. If you cannot figure out which is North and which is South, remember the sun always rises in the East.

In the Southern Hemisphere, you will be 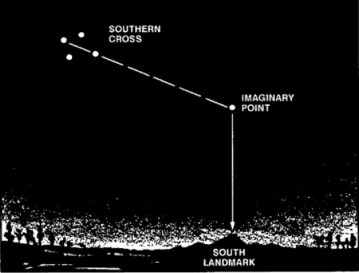 looking for the Southern Cross. It has four stars and the two that make up the cross’s long axis are the pointer stars. Draw an imaginary line between them to a distance of five times that between the two. Where the imaginary line ends is South.

Being able to navigate using the sun and stars are skills that every survivalist should learn.

If you found this article useful, please click the “Vote for Me” icon at the right of the page. Thanks!

7 thoughts on “Finding Directions Without a Compass or GPS”