The handgun is in reality a poor defensive weapon compared to a rifle or shotgun. But it has the advantage of being lightweight, portable, concealable, and probably more likely to be on you when you need it.

But the handgun is only half of the equation. The other half is the ammunition you use in it. If you have been around gun people, gun ranges, gun stores, or have done a lot of gun reading, you know that there is a lot of controversy still about caliber.

There are still those who maintain that only a .45ACP is adequate while others maintain that 9mm Parabellum, and the .40 cal. are suitable. These arguments had validity back in the days when military, round-nosed full metal jacket bullets were what was available. And in a military situation where I have to use this type of ammo, I would pick .45ACP over 9mm Para.

But as civilians, we are not handicapped by the Geneva Convention in selecting defensive loads for our handguns. Most of the major ammunition manufacturers have developed highly effective jacketed hallow point defense specific loads in the most popular calibers.

Personally I think the 9mm Parabellum, in modern defensive loads, is the answer. Unlike the .40, it is a military caliber with relatively inexpensive round nose full metal jacket loads to practice with. And you can get more of them in a magazine that you can for a .45acp.

So how do you logically select the right ammo for your handgun? Let do this by steps. If you are also buying your handgun, 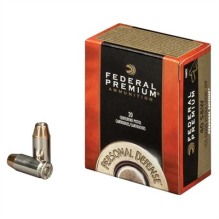 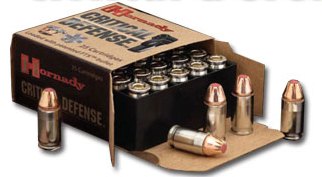 and test them in your handgun. If you already have a reliable handgun you are happy with, then start with the ammunition selection process obviously.

What you want is a load that functions reliably in your particular pistol. This is the MOST important criteria. A secondary consideration is the amount of muzzle flash any load creates in your handgun in low light level situation. Then you can consider accuracy. Honestly, most handgun/load combinations will shoot more accurately than the average Joe or Jane can shoot under stress. In other words, it doesn’t matter if you shoot the attacker perfectly through the third button on his shirt or 3 inches high, low, left or right.

I am often asked which brand of handgun ammunition is the best for self -defense. I honestly don’t think it really matters. Each of the above manufacturers approach the problem from slightly different angles to accomplish the same thing. Placing the maximum amount of energy on target. And don’t forget that they are competing with each other. It’s called marketing for a reason.

Take your time, try different loads and make a decision based on the above criteria.

5 thoughts on “Selecting Ammunition for the Defensive Pistol”