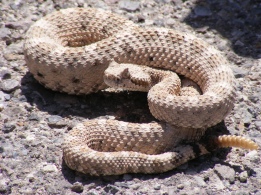 OK, your a hard core prepper that had to bug out when SHTF, and you have been surviving on your MRE’s, Mountain House and other prep foods. But it is starting to look like this situation is going to drag on for a long time and you need to supplement your food intake with what’s available in the wild. In most parts of the country, notably the Southwest, you have an abundant supply of handy nutrition. It’s called Jake the Snake!

Survival is making do with what you have. The rattlesnake is found throughout the Americas, and yes, they are good to eat. Snake meat has protein that could be vital to you in a survival situation. They come in an amazing variety. For a concise article on rattlesnakes, look here. Rattlesnakes are indeed venomous and you certainly have to be careful harvesting them. Remember that a rattlesnake can strike for a distance approximately one half to two thirds the length of it’s body. Few people actually die from rattlesnake bite because they receive fairly quick medical attention. But remember, in a survival situation, your medical support is going to be ‘Dr. You”. Learning to treat snake bite should be high on your list of first aid techniques to learn. If you are surviving in a high density snake area, you might want to consider a pair of snake gaiters., 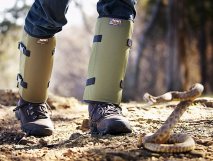 and insure you are wearing proper boots for outdoors. A thick pair of gloves would be a good idea also.

Rattlesnakes are deaf, they cannot hear you. But they are sensitive to vibration. If you carefully sneak up behind them you can kill them with a long handled shovel. However, rattlesnake have been known to attack their aggressors so get it right the first time. Personally I recommend shooting them with shot shells. Remember, the head of the snake can still bite you even after he is dead, and even after you cut the head off. This is from nervous reflex. After you kill the snake pin it’s head to the ground with a forked stick, then cut the head off about 4 inches back. Again, avoid the head, even one that is cut off.  Slit the snake from head to tail along the center of its underbelly. Sever the tail completely, and peel away the skin starting at the blunt tail end and pull upward to the other end of the snake. The skin will pull away easily, with little force. Scoop out the intestines and organs and wash the meat.

Rattlesnake meat can be cooked like any other meat. Baked, boiled or roasted. For some good rattler recipes, look here.

In a survival situation, you need to maximize your nutrition. Jake the Snake is a handy meal.