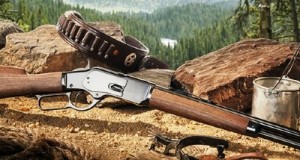 The subject of weapons for survival is hot and heavy in the prepper community. Magazines and blogs offer all kinds of opinions and solutions. If you follow the mainstream “Prepper press” you would be convinced that unless you own the most modern military style battle rife, then you are SOL when SHTF. Not necessarily so.

There are as many opinions about which firearms a prepper should acquire to survive a SHTF episode or even TEOTWAWKI as there are firearms. I have written about building a survival battery for beginning preppers as well as oldie military rifles for preppers. But there is one class of firearms that is often overlooked. And that is the lever action rifle. Now, before you start laughing, some very serious weapon instructors such as Gabe Suarez have dusted off the lever-action and shown how it has the capacity to be an effective fighting rifle.

There are basically two type of lever-action rifle generally available to the public. Those with open top receivers and those with closed top receivers. Both eject out the right side.

The Winchester Mod-94 is an example of an open top receiver.

The Marlin 336 is an example of a closed top receiver. Open top receivers are easier to access the chamber for single round loading. There are other lever-action manufactures such as Mossberg who makes a factory built combat lever-action and Rossi.

The lever-action can be had in two large rifle calibers and a number of pistol calibers. The two larger re the .30-30 Winchester and the .45-70 Government. In handgun calibers they can be had in .357 Magnum, .44Magnum, and .45 Long Colt, depending on manufacturer and model. Personally, I think the only advantage to having a lever-action in a pistol cartridge would be if you were carrying a revolver as a defensive handgun and wanted interchangeability of ammunition. However this seriously limits your range with the rifle. The .30-30 Winchester would be my choice in a lever-action. This cartridge has ballistics very similar to the Russian 7.62×39 round chambered in the AK. The 45-70 is an excellent cartridge and was designed to take animals as large a buffalo. But I personally feel that the .30-30 is a better choice for the prepper due to availability and cost of ammunition.

Most lever-action rifles come equipped with “Buckhorn” style open sights. These are perfectly adequate but a ghost ring aperture sight would be an improvement. Also, an Aim Point type sight could prove to be

useful at relatively close range. I am not a big fan of bandoliers as they expose your

ammunition to the elements, but many people do like and prefer them. I prefer a dump pouch similar to one that Tactical Tailor makes. Slings should be a simple two point strap sling.

The standard lever-action carbine with 16″ barrel in .30-30 could be a serious asset to your survival armory.

17 thoughts on “The Lever Action Rifle for Prepping and Survival”